Some new iWork updates this morning on my Mac Mini : KeyNotes, Pages and Numbers can now save password protected documents, can now display charts based on time series, more compatibility with MS Office Documents.

You can now do some things with Numbers that Office Excel already can since ages : sort on multiple columns, chart on time series… Progress!

All in all a good update, but frankly, this is late in coming, and the updates should continue coming to get even more functionality in there. I understand that this is a from-the-ground-up-rewrite, but these functionalities are what people expect from the start, not delivered 6 months or more waiting for it.

I have one column of numbers that has a monthly entry for each measurement. Multiple years in one column. I want to graph each year in this column separately. This works, but when I add a new monthly measurement at the end of the column and try to update the appropriate graph line, this results in a mess of graph lines.

So far, I haven’t found it, except redoing the whole thing from scratch. Somehow I expected a more intuitive process on doing this, but perhaps my intuition is failing me on this, or I have been brainwashed too much by Excel 🙂

Also, what is really bothering me is importing a csv file that has “,” separated values instead of “;” separated values. This results in the whole line being imported into the first cell, as Numbers expects “;” for csv. Nothing else.

I can’t even *FIND* the “import” command, you can only OPEN a CSV file in the regular way, and there are no options possible to indicate HOW you want to open the file / import it. Very disappointing.

Apple, please keep the updates coming, and make Numbers something worthwhile to use. Meanwhile, I have to write little scripts to do my work for me.

Last week the HD in my mother-in-law’s hand-me-down iMac went the way of the dodos and crashed, loosing all the information on it.

Did you know you can burn a copy of Ubuntu (I used 12.10) to a CD and it will load and boot on a mac, even with EFI firmware ? This helped me verify that the disk was indeed dead and non-salvagable (it was the /Users directory that was totally destroyed !).

The 24 inch screen is still great, the CPU (an 2,16 Ghz Intel Core 2 Duo) is a bit slow nowadays but still more than good enough for surfing and showing photos and playing music, so I figured why not replace the hard disk and save some money ?

I visited iFixit.com and checked if they had a repair guide for that particular iMac model and sure enough it was there. I bought the necessary hard drive and Torx screwdrivers, and I have just now succesfully replaced the failed 500 GB disk with a 2TB disk.

When I subsequently booted from the Snow Leopard disk, it couldn’t see the drive, but a quick trip to the disk utility made it show itself, and I was able to format it and continue the installation – everything is just fine, thanks to those iFixit people !

Note that iFixit is a free service, but you can help them out by buying repair tools or hard disks from them, or writing your own guide.

I figured I could help point some people in the right direction – they have an amazing amount of DIY repair manuals !

PS – for those who break the temperature sensor on the HD or the wires (I didn’t) : there’s a software solution for that !

I recently moved my buro up one level to the first floor, next to our bedroom. As I don’t want our bedrooms to be bathed in wifi radiation all the time, I’ve bought and installed 3 develo powerlines AV500+.

You connect one of these devices to your router via a network cable, and plug it in a socket. Then you connect up the others. Your network data is passed along via the powerlines, without needing to put wifi everywhere (plus it’s a hell of lot faster – these ones can go to up to 500Mbit per seconds, fast enough to stream movies to your ps3 !).

I used to have 2 older Devolo devices, but those were manual setups – you needed to connect them to your computer, and run a config program to set the network ip address and other settings. It worked, but it was a nerd tool.

These AV500 ones are much more sophisticated and just work out of the box. Plug them in, hook up the network cables, and they just work. Excellent !

Additionally, if you want to, you just press a button on each and they set up an encryption between the devices. This is a way to prevent your neighbour – who may be on the same power network as you – from plugging in a similar device and getting access to your computers and NAS (Network Attached Storage).

You can also configure them via the DLAN cockpit program, which scans for them and shows them in a graphical way letting you change settings, etc.

The one I bought have integrated plugs that have an integrated filter that filters out the oscillations of the computers / networked devices that they work for.

The problem I had was that upstairs I was constantly loosing my network connection. It worked for a time, and then suddenly would shut down again. The other devolo in the living room worked just fine.

After some trial and error (involving a switch, a router and some reboots) I noticed that I had to unplug the devolo downstairs connected to the router, and then it would work again when I reconnected it.

Further investigation via the DLAN cockpit program showed that there was one thing different – the version number of the upstairs devolo was lower than the others.

So I upgraded this one to the same version as the other Devolo’s and hey presto the problem seems to be solved – my network connection has been consistently up for the last 48 hours !

So, the conclusion is that all Devolo’s need to be at the same firmware level.  Thought I would share it with you for those who might have similar problems.

[Please note that this did *not* solve all my problems completely, please read the followup if you are still having problems]

When I upgraded from Mac OS X 10.6.0 to 10.6.1, suddenly my 2006 iMac became a sluggish beast, trashing the disk for every little thing that it needed to do. Changing to another virtual desktop became 10 seconds of pure torture instead of a slick swish… At first I thought this had nothing to do with the upgrade, and thought my disk might be going bad.

Onyx, the all-in-one swiss knife of maintenance tools that I ran found out that I had a disk error. I fixed this by rebooting with the Leopard install disk and using disk utility there to correct the error. But my iMac kept being sluggish. Launching programs became an interminable wait (ok, ok, 10 seconds are not interminable, but they do add up in the long run when you want to get things done !)

Now that I upgraded to Mac Os X 10.6.2 things are suddenly running smoothly once again. I don’t know what happened, but they did something ! 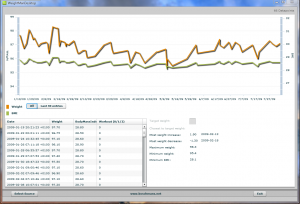 I updated my little AIR application called WeightManDesktop (which uses data from WeightMan, a free  iPhone application made by Katachi Studios) to version 0.2.

You can download version 0.2  of the program by clicking on the install badge. Version 0.1 entry and description can be found here.

I just did an upgrade to WordPress 2.7. Woooooh, the admin interface has received a totally new look which I really like, you can install plugins from the admin interface, the upgrade process from now on is supposed to be just one click and no need to delete files and upload new ones… All in all a big upgrade.
Hopefully there will be no big security bugs with all these changes…

A year or 3 ago I bought an advanced hard disk recorder from Kiss-Technologies (a danish firm, since then bought by Linksys who in turn have been bought by Cisco). It can do things most recorders nowadays still won’t do, and do it quietly.

All the above can be found, but usually you need to buy both a dvd player and a media player to get that functionality.

The problem of those marvellous machines however, is that they are no longer made (which is a damn shame), and the power supply was custom made, and used bad transistors. It is stated that within 3 years of purchase, the psu will fail. Most of the time, it’s just the power supply.

This was wat happened to us 10 days or so ago. It would just display ‘KISS DVD’ on bootup and no longer allow me to eject the cd.

I scoured the MPCC bulletin board, which specialises in media players or all kinds and found out that this message is the sign the psu has broken down.

Lucky for me, I found a reference to a small website called osCommerce run by Kim Tapdrup that specialises in repairing KISS DP power supplies. Either you can ask them to sent you the transistors and you do it yourself, or you can sent it to them for repair (they no longer sell the original power supplies, since those are out of stock). A repair costs around 40 to 50 euros post and packin included.

So I figured : what the heck, why not try it, and I paid for the repair and sent him the power supply from the DP-558 securely wrapped (it’s real easy to remove, since it is installed on a separate print plate).

And today a priority package from Danmark arrived ! I installed the psu again and lo! and behold! our beloved KISS DP-558 is working again. I’m hoping those new transistors will keep it humming for quite some more years !

So a big thanks to Kim Tapdrup for still running these repair services after all these years and being so prompt in repairing it !

I just upgraded WordPress to the latest version, 2.3. As usual, the upgrade went smoothly. It’s almost a rule, you take a backup of everything, and then the upgrade goes fine.

You don’t take the backup, and everything goes tits-up.

One thing that I really like is that it seems more responsive, quicker somehow. Plus the plugins tell you themselves (well, most of them do) when a new version is available. Cool !

And of course, finally, FINALLY, we have built-in tagging. Woot!