This is a fix for iphones in unsupported countries (at the moment only the UK, France and the USA are supported).

If you upgraded your iphone to firmware 1.1.2 and are suddenly realising that :

then you need to install the 1.1.2 tweak from Conceited Software called iWorld. You can find this in via the installer.app in the Tweak (1.1.2) section.

This fixes the crash that happens in countries that are not supported by the iPhone.

Took me while to find this, maybe somebody else can be helped with this.

[I notice in my logs that lots of people still visit this link – you should no longer need to do this. Simply BlackRa1n your iPhone and install Cydia or Rock. They normally do this for you – I certainly no longer muck about with version 3.x of the iPhone OS. Plus with the fact that there is a virus out there for jailbroken iPhones… Be Carefull !!]

Any user who has logged into his iPhone via ssh (and has installed the bsd subsystem) or has used the installer.app terminal application can do the “df -h” command to get a human-readable output of his iphone partition setup.

It’s basically set up in two partitions : one root (/) partition and one /private/var partition which is mounted afterwards and tacked on to the root partition. It’s actually this /private/var/ partition that contains (under another subfolder ‘root’) all your music, videos and other media.

The root partition contains your installed applications (under the folder ‘Applications’, and since Apple locked the phone down and didn’t think anybody else would add stuff to it, it only provided a minimum of space for the root partition – 300 Megabytes or so. And your /private/var partition has close to 7+ Gigabytes !

With all the applications that I installed via Installer.App, I’ve recently gotten the message that the iPhone has low disk space on its root partition. I’ve got about 13 Megs free, and I dread adding other applications for fear of running out of disk space. Lots of bad things happen when your root partition runs out of diskspace…

So I’ve stumbled over another link that documents how to move your Applications folder to the /var folder so you can install all that you want.

You basically need to do the same thing that you do when you need space on another unix/linux machine :

I haven’t tried this out yet, but my guess is that you can be much more selective by doing this one level deeper : installer.app for example, should be able to add all the new programs to the the /private/var/root/Applications partition, and then put a symlink to it in the original /Applications folder.

The advantage would be that

I’ll probably give it a test for installing python on the media partition, I’ll let you know.

While the jailbreaking and unlocking of your sim is easy as pie when you have an iphone using firmware 1.1.1, upgrading to firmware 1.1.2 can be a whole other can of fishy noodles. The process involves prepping your unlocked and jailbroken 1.1.1. iPhone and then upgrading to the latest 1.1.2 version, and then running from your mac or pc the jailbreak software for 1.1.2, which will flash it again.

It seems that most upgrade guides are particular in their wording, and if you have the ‘malchance’ to not exactly have the same files on your phone as the one providing the guide, you can be up in shit creek for several hours. I know I was.

I upgraded from my jailbroken and unlocked 1.1.1 firmware to 1.1.2 by downloading the new jailbreak program from Conceited Software, which in its latest version includes ‘hactivation’ of the sim. Or so they state, and for most people it’ll probably work (as read on several forums), but for me only the jailbreak part worked, minus the sim activation.

After much, MUCH, MUUUUUCH trial and error and repeatedly going to back to firmware 1.1.1 (thank god for that) I found out that I needed to perform two extra things while preparing for my upgrade to 1.1.2 :

Phew. Was it worth it ? I’ll need some more time to check it out again, while I’m installing all my third-party programs again…

PS – if you want complete guides to hacking your iPhone, I can recommend this site.

Now that I’ve got my iPhone, I am constantly amazed about it. I’ll list just a few things about that caught my attention.

Of course it’s a phone, that’s why you bought it in the first place. But the UI is soooo well done, it’s scary. It’s scary that it took all this time for someone to come up with a UI that is better than all that windows mobile smartcrap. It’s the smoothness with which your pin login screen appears to unfold when you press the home button. It’s the nice sounds it makes while you work with it. It’s the way your fingers seem to be able to type on those smallish onscreen keys yet you still manage to select the right letter almost all the time. You can read more iphone gushiness from Stephen Fry’s blog.

It’s a computer in its own right. You can install ssh and the sshd daemon on it, and you can login to it like any other computer. You are using the zsh shell, you can install the latest version of the python scripting language, ruby or Perl. The Apache webserver runs on it, cron is installed, all the Unix command lines work just fine ! Your address book details are kept in sqlite databases, so any tool like python which has integrated sqlite access can access and use them.

While the phone baseband modem and the computer are kept separate in the iPhone (at least, that’s what I understand) the results of using the phone are saved to the computer side, so you can for example, install a script that will get all your calls (from an sqlite db) and put those calls in your ical calendar so you can see when you called and who (if the phone number is in the address book).

And it’s all very well integrated ! So well, in fact that you tend to overlook a few problems at first. One of them comes up pretty quickly : there’s no cut-and-paste possible, so quickly picking up for example an rss link from safari and dropping it in a rss reader is not possible. Perhaps a cut and paste solution like iClip would be a solution, where you slide the text or link to a sideboard to store it in, go to the other application and slide it in ?

Other things are missing as well. No GPS, no 3G, no search in your contacts (though you can find most of them fairly quickly).

Still, it’s a beaut, and as Chris Pirillo says: it just put the bar higher for the other phones to compete !

Seems a whole lot of people have spent enormous time on jailbreaking and subsequently unlocking the iPhone. For those who want to know more about this, here are a few links to get you started (please note that these links are valid at the time of writing, and that I am not encouraging you to go and hack your iPhone) :

Makes it very easy to get a real functional phone !

It should arrive real soon now.

Can you guess what it is ? 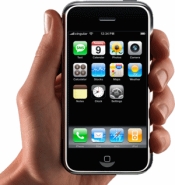 I’ve set up Google Analytics for a website recently, to keep track of the visitor statictics. Free is hard to beat, after all.

What is even better is for mac users is a free widget called Dashalytics that allows you to keep track of the Google analytic reports, without you requiring to log in to the site ! So, by glimpsing your dashboard you can get an instant view of how your monitored website is doing, how many visitors, etc.

About a year ago I bought myself a new camera (a Sony DSLR–A100) and it’s been a joy to use.

I had my sights on it for a few months, but it took me a long time to really convince myself to actually buy the camera. It’s not exactly cheap, but with a special price (100 euros cashback) and Fnac’s member day 10%, I managed to pick it up for quite a bit less than it was listed. Together with a 2GB Sandisk Extreme III Compact Flash card, I can snap away to my hearts content. Even with a 10 megapixel CCD it’s hard to fill up a card like that in a few goes. If you use RAW ofcourse, it’ll fill up easely !

As I said, the camera delivers great pictures, but each picture is 10 megapixels, jpeg fine (I keep away from RAW for the moment) and between 2 and 3 MB big. While this is fine, I want to keep my iPhoto collection snappy and use my hard disk for more than just my photo-collection. But at the same time I want to keep those originals stored away safely in case I want to edit them or print a huge poster of my children.

Aperture was out of the question, too expensive. So for now I’m using my own little manual workflow, using

The batch script file works wonderful, using ImageMagick, but I’ve been trying to use Automator to string the workflow together, but I can’t seem to get it to launch the bash script file correctly.

For now, I’m continuing doing this manually, until I either find out how to do this or give in and buy Aperture…

Kamran pointed me to the fact that here in rainy Belgium you can actually have an iPhone that’ll work with the GSM networks here. All you have to do is buy them from either Ebay or from a shop like Covema for the ridiculous amount of 995 euros !

I think i’ll still be waiting a bit longer…

You can find more videos of people helped by AssistiveWare here.