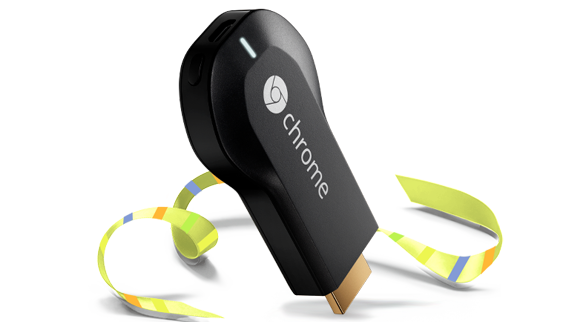 Last month I was passing through France and had the opportunity to buy a Google Chrome Cast doohicky for 35 euros; since then you can now also buy it in Belgium.

For those not in the know : the Chromecast dongle allows you to ‘cast’ things from your smartphone to your tv. So for example you can show Youtube clips or the latest snaps of your kids on your tv.

Setup is a breeze, really the easiest setup ever for such a complicated interaction of software and hardware – just install the hardware on your tv and install the chromecast app on your smartphone, the app gets you up and running in minutes.

Behind the scenes it must be quite complex: the app disconnects your smartphone from your wireless network, searches for the Chromecast dongle which is on it’s own default network, and asks your wifi password so it can pass it on to the Chromecast, updates it with the latest firmware, reconnects to your network, and it’s working ! I was fairly impressed with the ease of setup.

Once the setup is done, you can start ‘casting’ pictures, home-videos, etc from your smartphone to the chromecast. Each app that can do that has a chromecast icon somewhere that you can tap, and then select your chromecast dongle.

The data you are casting is actually not directly sent to the chromecast, but first goes up to the internet, and then back down to your dongle.

I played around with it for few days, and here is my feedback :

Those Royal Society videos are actually really good to get the gist of something quickly! Here’s one that presents some findings about empathy and how this might affect us all in the long run.